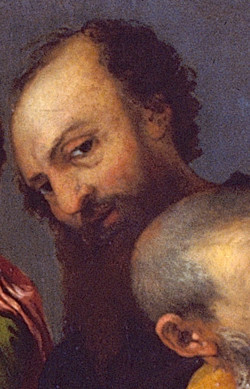 Born in Venice around 1480, the young artist chose to move to Treviso, where his presence is documented from at least 1503 to 1506 despite constant movement to and from Venice. In the towns of inland Veneto Lotto formed a relationship with the humanist circle of Bishop Bernardo De Rossi from Parma, which straight away provided him with advantageous and profitable commissions.

In October 1506, Lotto arrived in the Marche region and started his great altarpiece commissioned by the Dominicans of Recanati, which was the visual culmination of the whole training course bringing a close to his period of youth.

In 1508 Lotto was based in Rome, at the Vatican, to paint the rooms of the new apartment of Julius II. What most undermined his ideological assumptions and style was undoubtedly a direct comparison with Raphael who, with effect from October 1509, was entrusted with the full responsibility of art works at the Vatican.

The period between 1509-1516 presented a somewhat “dark age” with regard to the movement of the Venetian artist. On October 18, 1511 Lotto was certainly in Jesi where he signed the agreement with the Brotherhood of the Good Jesus for a painting of the Deposition and in Recanati he signed the Transfiguration and St. James Pilgrim for the Confraternity of the Nobles.

The following decade, the one called the years in Bergamo, was undoubtedly the happiest and most creative phase of Lotto after the Roman doubts.

At the end of 1525 he decided, after 20 years of absence, to return to Venice, where the rising star of Tiziano, with his sensuous and joyful painting, precluded him the favour of the clients. Fortunately, work was guaranteed once again from the province, especially from Bergamo for which he elaborated the coloured drawings for the inlays of the choir of St. Maria Maggiore and Marche where his work was addressed towards impressive altarpieces. Dated 1531, the two canvases with S. Sebastian and St. Rocco in Castelplanio are now preserved in Berlin; the following year dates the altarpiece of S. Lucia in Jesi and to follow the Visitation again in Jesi, Our Lady of the Rosary in Cingoli and the Saints Rocco, Christopher and Sebastian in Loreto, the impressive Crucifixion located in Monte S. Giusto.

In 1538, the painter was in Ancona and it was there that he began to write the Book of expenditure preserved in Loreto in which he noted a bit of everything in a humble chronicle of working commissions, paintings created and sold, money received and due.
The return to Venice in January of 1540 marked a time of dashed hopes, in search of an emotional stability never to be achieved, of awards always denied by his home-town.

Once again it was Marche that offered him refuge and work. In 1547, he created the Assumption in Mogliano and two years later he moved back to Ancona to lead another altarpiece of the Assumption for the church of “S. Francesco alle Scale”. Left alone and with no money he decided, in 1552, to finally retire in Loreto where he came to the decision to become an oblate, a kind of secular monk, almost exclusively at the service of the Holy House. In the last years of life, Lotto created other works; in particular paintings for the choir of the Shrine of Loreto, a series of paintings depicting stories from the life of Christ, aided by some students of his at the workshop of Loreto.

We do not know with certainty the date of death, which nevertheless happened between September 1556 and July 1557 when the administration of the Holy House collected three florins and five “bolognini” for the sale of a small mattress owned by Lorenzo Lotto.