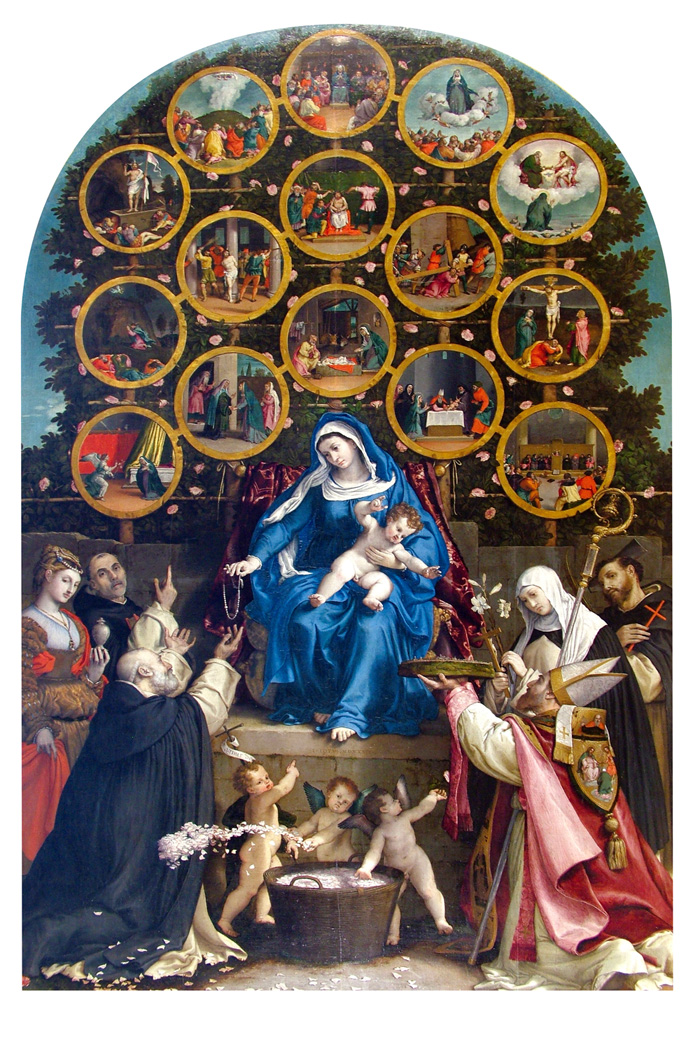 In the spring of 1537, the Dominican Friars from Cingoli commissioned Lotto to paint a picture for the high altar of their renovated Church. This painting, devoted to the subject of the Lady of the Rosary, was completed by Lotto in 1539, as we can read on the majestic stone on which Mary’s throne lies. Before the date, the artist signed up writing «L[aurentius] Lotus» in order to highlight that his surname in Latin recalls the flower of oblivion.

This impressive picture, 389x264 cm, is undoubtedly one of Lotto’s “masterpieces”: when he painted it, he was sixty years old by then and he confirmed his stylistic, technical, cultural and spiritual competence; indeed the Madonna of the Rosary in Cingoli is one of the most elaborate and semantically deep paintings of the sensitive and erudite Venetian artist.

On an almost nocturnal sky, a majestic rose garden stands out; in the background is a wood trellis on which there are fifteen medallions arranged in three different levels forming a sort of pyramid. These medallions represent the subjects of the fifteen mysteries of the Virgin cult of the Rosary. Detailed masterpieces in the masterpiece.

In this painting, which should be observed from the top to the bottom and from left to right, there are: the five Joyful Mysteries (Annunciation, Visitation, Nativity, Presentation of Jesus at the Temple, Finding of Jesus at the Temple), the five Sorrowful Mysteries (Agony in the Garden, Scourging at the Pillar, Crowning with Thorns, Carrying of the Cross, Crucifixion) and the five Glorious Mysteries (Resurrection, Ascension, Descent of the Holy Spirit, Assumption of Mary, Coronation of the Virgin).

A limitless wall blocks the bottom of the big rose garden. This wall is made of large blocks and it has been eroded over time; it is another background to the holy conversation with the Virgin, who is on the throne with Jesus. She is surrounded by Saints who are honouring her. They are arranged in three different levels: on the first level there is Saint Dominic (who is receiving the rosary beads from the Virgin) and Saint Esuperanzio (patron saint of Cingoli who is offering a lifelike scale model of the town seen from the east; Jesus, attracted by it, is almost risking to fall); on the second level there is Maria Magdalene, in a smart dress of the 16th Century (according to legend, she looks like Sperandia Franceschini Simonetti, a noblewoman from Cingoli) and Catherine of Siena; on the last level there are the Dominican Saints Vincent Ferrer and the unmistakable Peter of Verona, recognisable from the odd image of the cleaver in his head which recalls his martyrdom.

At the bottom and in the centre of the picture, there is the little John the Baptist who is pointing to Jesus and then there are two angels; one of them is spreading the rose petals with both hands contained in the wicker basket in front of him. This gesture has an evident symbolic and metaphorical value but above all recalls the ancient folk tradition of spreading flowers when the image of the Virgin appeared in the religious festivals.