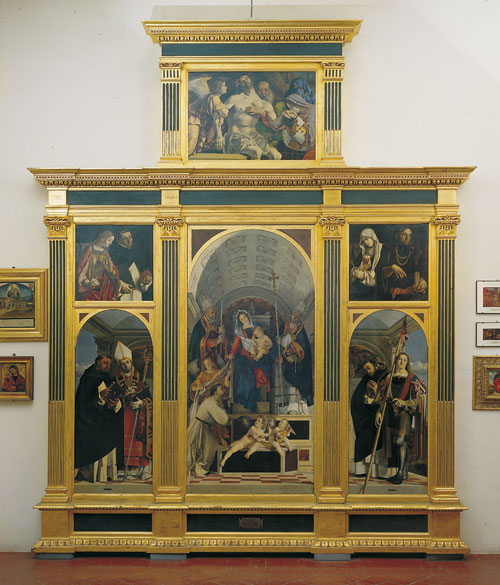 The shortened figures of the Saints placed around the throne of the Virgin in an architectural and perspective space of Bramante ancestry are illuminated by a cold and clear light which highlights Antonelli’s plasticism of the figures captured in a confidential and spiritual conversation. The Dominican Order (who commissioned the work together with the Municipality of Recanati) is represented in the fullness of its theological virtue and ability to martyrdom via its most important Saints which are placed near the heavenly patron saints of Recanati: Vito and Flaviano. In the Cymatium, a strong, dramatic and touching reverence shows an extraordinary ability to pensively interpret pain. The figure of Christ, whilst dying still manages to emanate energy only temporarily suspended. The drama is not shown by his strong and tensed body with swollen veins but it is recognized in the extreme human despair of those present.

It is perhaps the most famous painting by Lotto that explains the miraculous event that take place at the very...

This small painting is dominated by the imposing figure of the saint depicted according to the canonical elements that define...

The artist reestablishes in a stern key the image of the saint in the typical clothes of the Dominican order....

The landscape and figures, the feelings and emotions are translated with pitiful outbursts and expressive movements to the limit of...